The Mythology of Mind Control: On Myth, Metaphor, and Seduction of the Sea 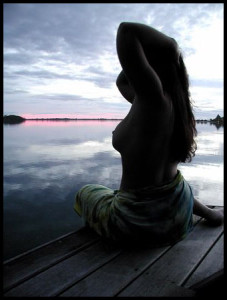 Whenever I find myself growing grim about the mouth; whenever it is a damp, drizzly November in my soul; whenever I find myself involuntarily pausing before coffin warehouses, and bringing up the rear of every funeral I meet; and especially when my hyppos [hypochondria] get such an upper hand of me, that it requires a strong moral principle to prevent me stepping into the street, and methodically knocking people’s hats off – then, I account it high time to get to sea as soon as I can.
This is my substitute for pistol and ball. With philosophical flourish Cato throws himself upon his sword; I quietly take to the ship. There is nothing surprising in this. If they but knew it, almost all men in their degree, some time or other, cherish very nearly the same feelings towards the ocean with me.

The ocean is singularly greater than all of us.
We can challenge it, we can cross it, we can ride its waves and plunge into its depths, we can even poison it and pollute it, but it is greater than us.
We are drawn to it, to stand in its surf and stare out into the unknown, to listen to its waves, and we know its enormity so fully and inherently that we turn to it as a metaphor for anything with a depth that we feel is greater to fathom.

The ocean does, as Melville writes, call to us, and when we face it we can only surrender to its enormity. Yes, we strive against it, yes we struggle to survive it, but we can only ever hope to endure it.
Whatever our conquest may be in its crossing or braving, the sea is not bound by our mortality and will win out against us in the end.
Its rage is devastating, its bounty is limitless, and that is in no small part why we are drawn to it.
We are, one and all, bound to things outside of ourselves, we are compelled and intrigued by forces greater than ourselves because we are self-aware.
We know our mortality and we sense our limitations, and it can be said that from this self-awareness we draw a context for all we think and all we feel.
We are bound by the filter of our mortality simply because we are mortal.
This is why we are compelled to understand and experience what we are not, be it the endless depths of the sea, or the stories and experiences of others, as well as the act of submission.
Submission in and of itself, in its purest form frees us from ourselves and we see this in the quote above. When we become too much inside ourselves, we search for a way to lose ourselves.

When we submit, to God, to the Ocean, to Trance, the full thrust of our emotions, or whatever else it may be that swallows the self, we lose that sense of self in something greater and become as we are not.
When we cease to be self-aware we are no longer bound by the mortal lens, no longer bound by our own awareness and we become of something and not merely a witness to something.

Metaphor is also reciprocal.
Love is an ocean.
The ocean is love.
This is because metaphor fundamentally communicates equivalence, if it didn’t its utility would be considerably more lacking.
In thinking on metaphor it is important to recognize that a metaphor is not an allegory, nor is it a simile. Allegories tell us and relate to us a singular particular story and similes provide poetic comparison.
Metaphor provides context, as such, our mythology is metaphor.

Our myths frame and provide context for everything that is greater than the singular lens of the self.
Everything from emotions, to relationships, to the ocean, and war, and all else can be framed by myth. In this, myth merges the self with what is beyond the self.
A myth is not a singular metaphor and while it may have a central intention, like all stories a myth is not bound only by one point or one purpose.
Myth also serves to contextualize us because it offers us an explanation of everything we know.

This brings us to The Odyssey and it will in turn take us to Sirens, Rhine-maidens, and Lorelei.
(We’ll touch on Nymphs later.)

The power a woman has over a man.
Lust, love, desire, the ocean of emotions that compel us.
The ocean is a woman, seductive, rewarding and wonderful, and wholly capable of destroying us.

This is the Siren.
Temptation, seduction, lust, the infinite and consuming lull of the waves, and the power that both the ocean and women have over men.
The Siren is both ocean and woman, and her voice captures us as surely as it conveys the inherent power of music and beauty.

Before examining the text of the Odyssey it would serve to frame the Siren in the canon of dangerous monsters and where they live.
As we will see later with the Rhine-Maidens and particularly with Lorelei, monsters live in dangerous places.
Monsters in mythology are often times the physical incarnation of their habitat’s danger.

The Will-O-Wisp, which draws its origin in part from luminescent swamp gas, is obviously found in marshlands. The danger of the creature is not just that it is a misleading glow of light, but that it leads the careless into unsafe ground.
Marshes, forests, caves, rivers, rocky coasts, these are all terribly dangerous places even to this day, and in history they were even more so.
There is a reason that in Beowulf the Grendel and its Mother lived in bottom of a fen, and why the Big Bad Wolf was out in the deep dark woods in Little Red Riding Hood.

The Siren is a deeply ingrained part of this mythical narrative tradition, and is one of the oldest recorded examples of the supernatural temptress.
Of course, the history of the temptress and of women with mind control powers is something we will get to as well.

We first hear of the Sirens when Circe, herself a supernatural temptress, warns Odysseus of their power when telling him the route his crew must take:

First you will raise the island of the Sirens,
those creatures who spellbind any man alive,
whoever comes their way. Whoever draws too close,
off guard, and catches the Siren’s voice in the air-
no sailing home for him, no wife rising to meet him,
no happy children beaming up at their father’s face.
The high thrilling song of the Sirens will transfix him,
lolling there in their meadow, round them heaps of corpses
rotting away, rags of skin shriveling on their bones…
Book 12 lines 44-52

She goes on to tell Odysseus that his crew should plug their ears with beeswax, but if he himself wanted to experience their call that he should be bound to the mast, and if he starts to demand to be set free once he hears their song, that he be bound tighter.

Here is his encounter with the Sirens:

“Come closer, famous Odysseus-Achae’s pride and glory-
moor your ship on our coast so you can hear our song!
Never has any sailor passed our shores in this black craft
until he has heard the honeyeyed voices pouring from our lips,
and once he hears to his heart’s content sails on, a wiser man…
Book 12 lines 195-205

He responds as Circe says he would, but his ear plugged crew leads him away.

The Sirens have sense traveled through western culture to the modern day, and a direct line can be drawn between the Sirens and the Rhine-Maidens in Wagner’s ring cycle and the germanic legend of Lorelei.
Lorelei is the story of a woman who cast herself into the Rhine and whose spirit haunted a very large rock in the river. She would sing and her song would lure fisherman and sailors to their demise, and would form a clear narrative base for Wagner’s Rhine Maidens.

The maidens guarded the Rhine Gold, and anyone who sought it would be brought to their doom by the innocent seduction of the maidens, and only one who denied love could claim this treasure.

When we view this through the lens of what all parts and parties represent, only one who refuses to abandon himself can claim this power. Only one who denies or does not feel the desire to be a part of something greater, believing themselves to be the greater, can rest control of a power that led to the fall of the gods.

We can parse from this that there is an inherent subconscious value in submission, in joining with and being a part of something greater.
All of these stories are told by men, and capture clearly the awareness of how compelling women can be, both from lust and for the fear of the destruction they can cause.

As such, the Siren perseveres as a mythic creature and as an archetype.

The Siren’s Song inundates pop culture, the concept and it is because there is an inherent honesty in the character’s core.

Now, what would you like to see explored next?

Also, here’s a fun podcast from cracked.com about how repetitive sounds, words, and actions impact us.
Cracked is a comedy podcast and the conversation is between smart and interested people that are not experts.