Fatale, a Wedding, and You 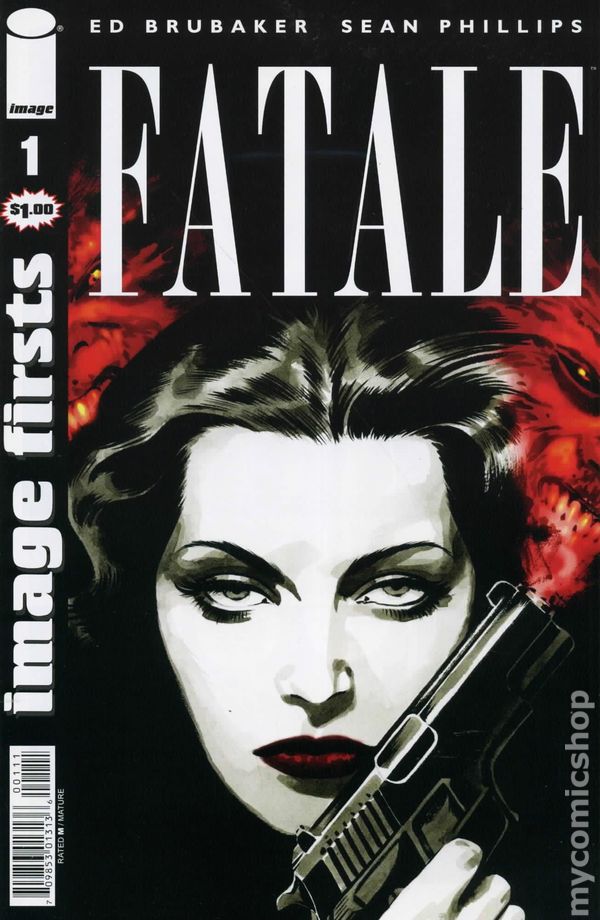 All the art posted here is from the Image comic Fatale written by Ed Brubaker, with art by Sean Phillips, it’s obviously not mine.

There’s a scene in a later issue of Fatale, where one of that story arc’s main characters is robbing a bank to get money together for his grunge band to pay for their music video.
That story arc was set in Seattle -where I live-, and that bank, in the comic, was a real location in 1995 when that story was taking place.
In the present day and for the last 20 years or so, it has been a coffee shop. It has been my coffee shop for most of that time as well, and I somehow missed that fact that I was sitting in that place reading that book, listening to Alice In Chains the first time I read it, because I’m old enough to be old Seattle.
But, what is Fatale in the first place?

Look back up at that picture.
That’s Josephine, no last name (anymore), and while you can’t see it in that pic, she has green eyes, black hair, and she can control any man. In fact, men can’t help falling in love with her. Men can’t help being driven to maddeningly compulsive and destructive behaviors for her.
She gets in their heads.
She can control them.
But more than that, men lose control when they’re around her.
It’s a supernatural power, it’s an obvious curse in a lot of ways, and it’s not a slow seduction, or a give and take, it’s emotional, magical dominance.

I was at a wedding this weekend, which meant small talk and being social, and fun stuff like that, and I have a few layers of answer for “what do you do for a living?”.
I’ll spare you all of them, but I use them to feel out if people are interested, and then if people are more than curious, but are actually comfortable talking about sex work etc.
This process led to me having a super fun conversation with a few people about what I do, which meant explaining what this fetish is.
Now, the reason this is all tied together is because I:

1. Re-read all of Fatale about a month ago. It’s 24 issues long, by one of my favorite creative teams in comics, and from the blurb up top as well as everything else, it’s pretty clear that this book was 100% up my alley.
2. When I was talking to these strangers about the fetish, I was talking about it in the larger context of how ideas like this get sexualized and fetishized, and how it connects to the  destruction of the self… which, spoiler alert for this comic… is what happens to every man who enters her life.
They are all destroyed by her. 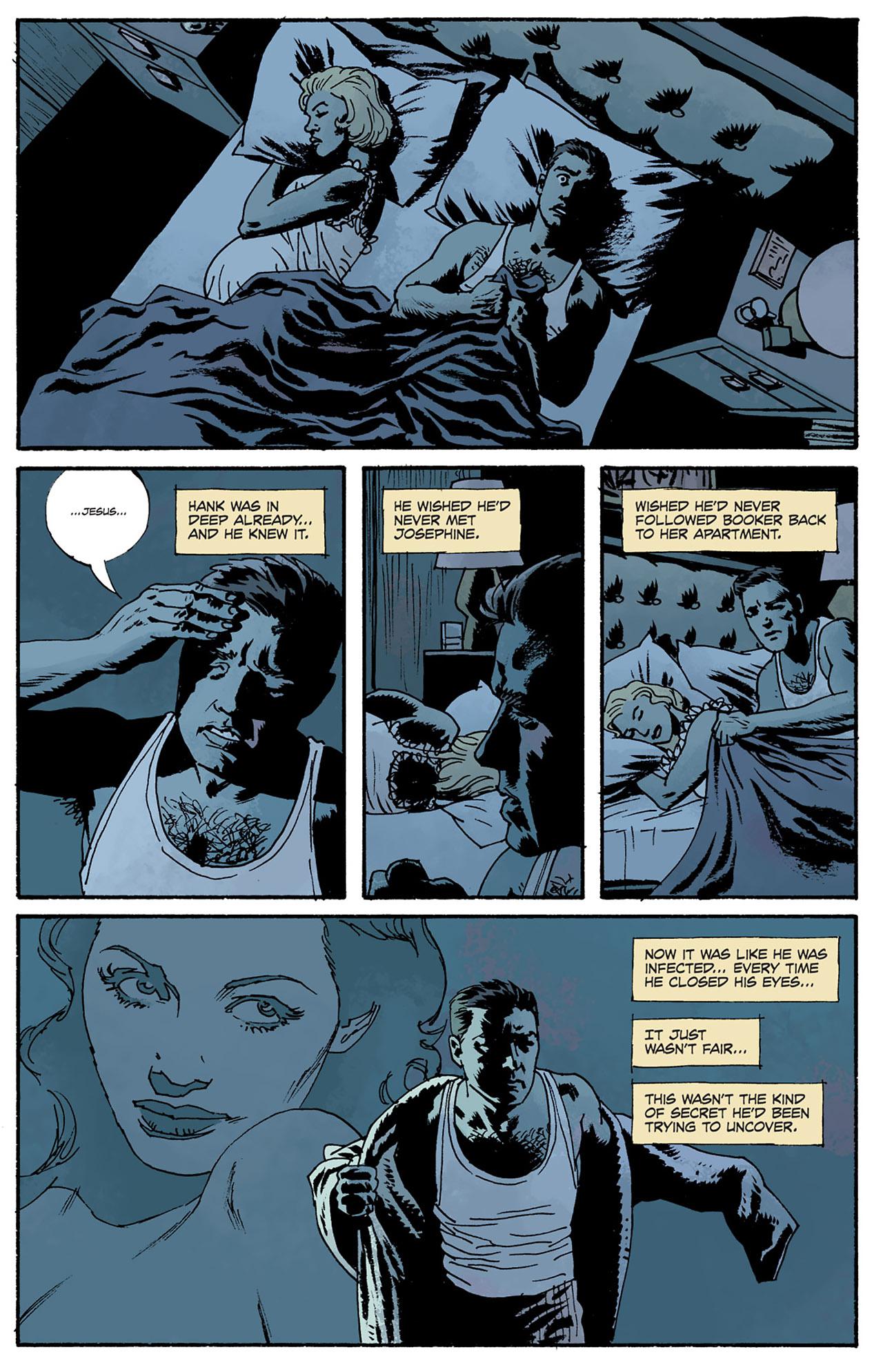 If this doesn’t sound sexy at all, it’s because it’s not. The series has a heavy cosmic horror bent, which includes the origin of her powers, and it has a heavy pulp noir bent, and plays on the literary tradition of the femme fatale (hence the name) being a wicked sexpot who usually ends up punished, is always objectified, and whose head we never spend any time in.

That’s what brings us to Jo, who is older than she looks, and who is being chased by forces that are maybe older than time itself. These forces are represented by evil men, and it is men chasing her, men making her the target of their desires, and men having turned her into a force that propels and dominates other men’s desires.
She’s an actual fetish.
She also happens to be our fetish, and the feelings, the fallout, and ideas that make up what happens to the men she interacts with also sound a lot like what we say we want to feel, what we have felt in some degree, and what we’re afraid may happen to us if/when we lose control, or habituate our own loss of control.

While I was talking to these people about how the sexy witch, or sexy vampire, or siren from mythology is all part of this, I was also talking about cliches, and how fetishes sexualize core components of things, and how because so much of what fosters these fetishes comes from media, we sexualize those representations as part of the experience.
if, for example, a woman came up to you out of the blue and said, “Look into my eyes”, that would probably do it for a lot of us.
For Jo, she is a walking cliche, and that’s entirely the point of her. It is the very idea of the beautiful, charming woman that shakes us to our cores, and takes away our agency.
We, as varying degrees of fetishists with sub instincts and desires, want to be lost, to be a step out of time and as such, out of control, and we want the symbols of that because that’s how we know it’s real from the outside.
I think for those of us who are not “hypnosis as a tool in kinky play” people, but that are more specifically femdom hypnosis people, we want the safe version of Jo, or the idea of her. We want the cliche, because to our minds, the cliche is real, and in the comics, Jo’s power is real, she really is a fetish brought to life.
Of course, the brilliance of the book is that she’s the main character so we get to know her as a person, and we see the burden of her powers on her.
We see the way loss of control becomes barbaric, and the way it becomes addictive, and when I said that the men in this story all experience a destruction of self, I wasn’t exaggerating. Her power turns them into what the world sees her ass, cliches.
They become lovesick tools, or hopeless romantics left holding the bag, at least before theu end up obsessive, dead, or obsessive then dead.
Some of them die noble deaths, but their nobility is mostly performed under a lack of free will, a response to her power, an act of performative goodness that feels real, but comes from her conditioning them, intentionally or not. 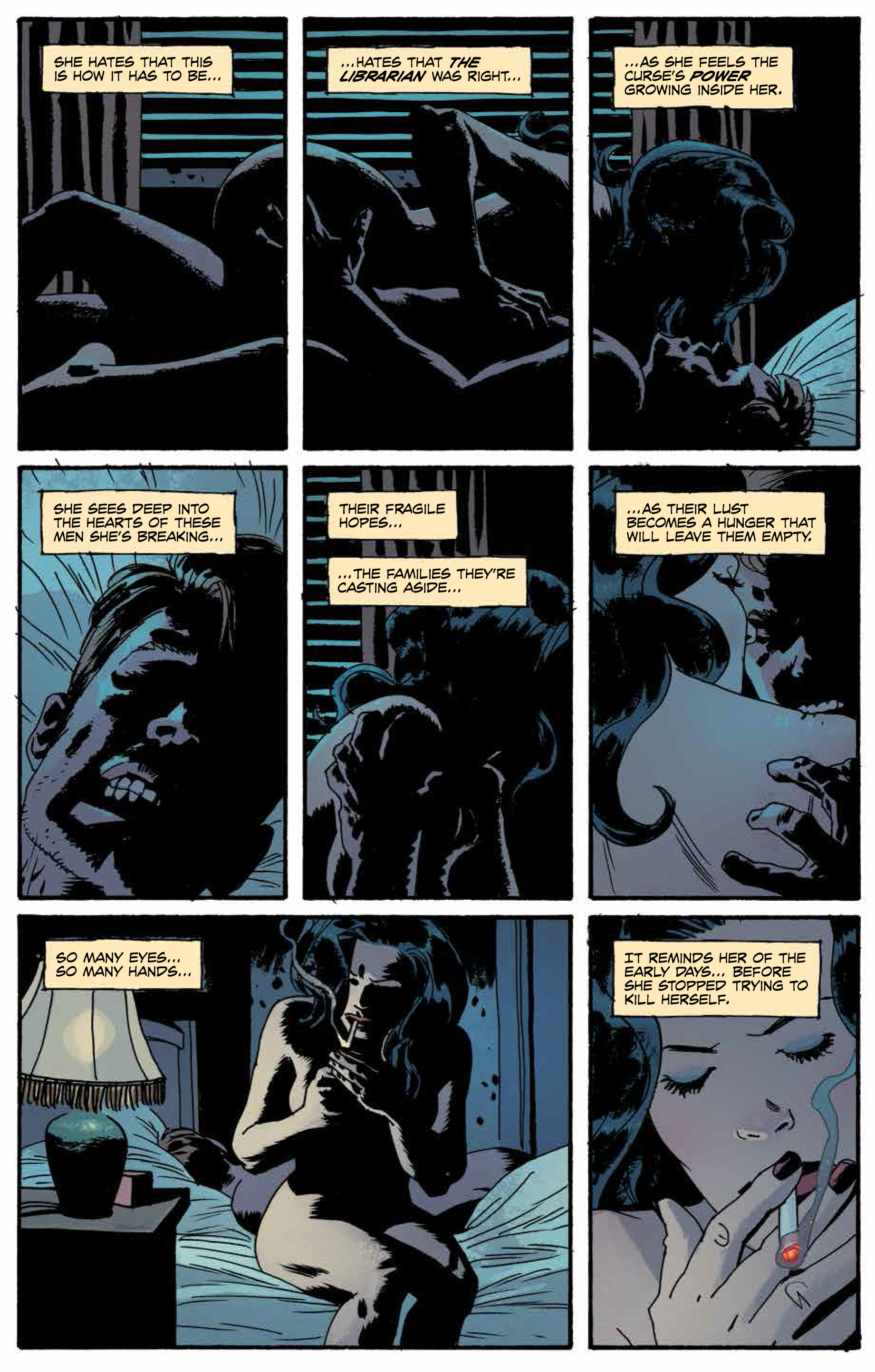 There’s a scene in an issue towards the middle of the run where Jo explains her powers to a young woman, and the woman asks is she’s really supposed to believe that Jo’s hypnotizing these men into obeying her, and that’s deliberately not what she does.
There is no artifice to her power, no incantations or trinkets, it’s her essence influencing these men no matter what she does, and then as she come sto understand her power more, it becomes more focused, but Jo is never able to turn it off.

And that’s what compulsion is, it’s also in my limited experience, what fetishes are. They’re an ever present awareness, a lens to at least recognize something non-sexual as having a potentially sexual relationship to you.

I had an interesting (very emotional, not sexual at all… thankfully) hypnosis experience with my previous therapist that, once the emotions were in check a little, led to me telling her the specifics of what I do, which honestly hadn’t been relevant, and led to a pretty good laugh when I told her my inner monologue was, “I really don’t want to explain to her why I have this horrible out of place erection”, which I didn’t have just to be clear, and an even bigger laugh when I told her I knew exactly what was happening after she asked me if I wanted to try a guided visualization, and was like, ‘is it going to be a relaxing beach? Stairs? A fluffly cloud, how’s she going to do it?”
I bring this up because luckily I’ve really grown into myself and my relationship with all of this, and also my relationship with my therapist and my mental health in general, but in the simplest terms, a part of me knows that the idea of my attractive female therapist hypnotizing me, especially without outright saying that was what was happening, does speak to that compulsive side, that world view of what’s been fetishized by my brain.

Fetishes can sometimes feel like a whole inside of us, and can create a different kind of loneliness because we’re struggling to understand an intensely intimate part of ourselves that we may not understand, so if we don’t understand it then how can someone else?
Unless of course that someone else happens to be a pro domme, whose literal job it is to traffic in our fetish.
The pros we see, and seek become our very own Jo’s of the world. They are, at a glance, the embodiment of out desires, especially from the pop-culture inspired femdom side of things, because as much as we fetishize “look into my eyes”, part of us wants to meet a woman with this abilities, and that motivation and intentionality.
It is our own way of wanting to be wanted, which we all have, and that kind of lust and desire, that kind of loneliness is more easily understood than the existential dread of not having our sexual desires understood… or even having them at all, so when they’re addressed, or met, or when we find a way to talk about them and become understood, then two things can happen: 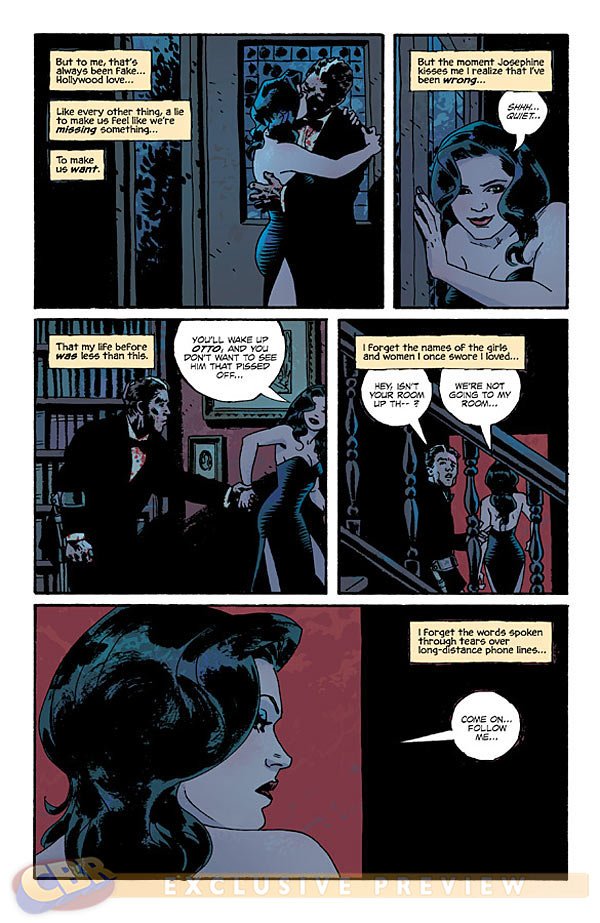 As you can see from the watermark this one was from cbr.com, which has had its ups and downs as a solid comics news site, but it’s still around so there is that…

You can feel something a lot like love, the raw power of communion and finally being understood, something that comes from the core of you, something wholly unique and powerful that inspires you, and helps you continue to find yourself. 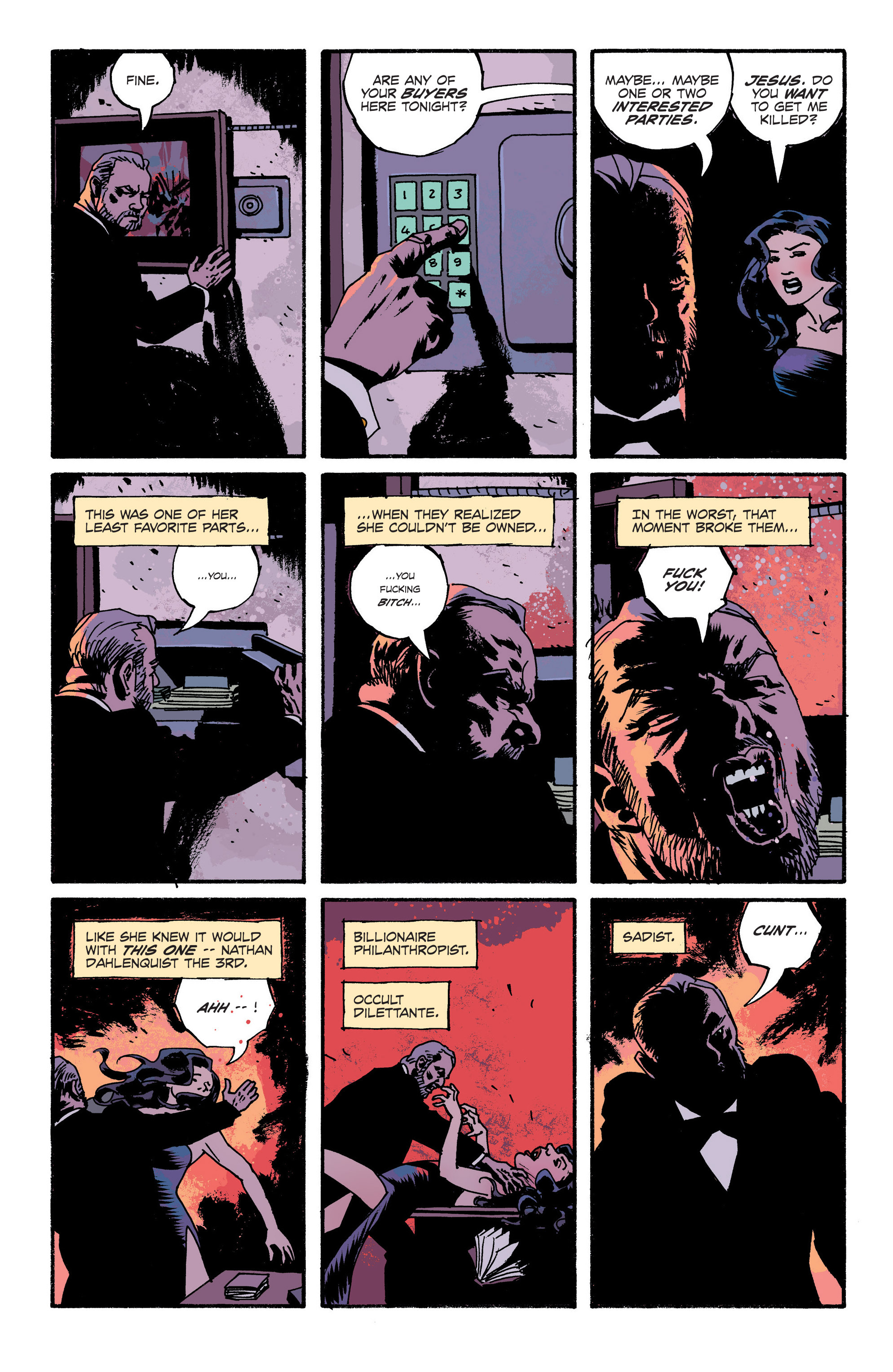 The emotional weight of everything, the reality of it can touch on your fears, you anger, and your jealousy, because you finally have the feeling, or the experience, or both, that you’ve been after for so long, but the fantasy isn’t something you own wholly unto yourself, and it isn’t someone you get to own, or have or keep, and all of those submissive instincts are replaced by your need.
You still lose control, but you lose control of yourself, and not in a sexy way.

So where does this leave us? What more does the comic have to do with any of this?

The only way we can own our fetish, and own our desire to lose control and lose ourselves, is to be what we are, without shame, but with consideration. Know when you’re playing, know when your feelings are getting too big, and remember that our dommes are just like Josephine, not that they have magical powers (they do?), but that we see them and we see the idea of what we want and not who they are.

So, own up to yourself, your feelings, and your desires, and BUY Fatale wherever comics collections are sold, because that’s the only way we can kill our demons and live with what we are and have become. 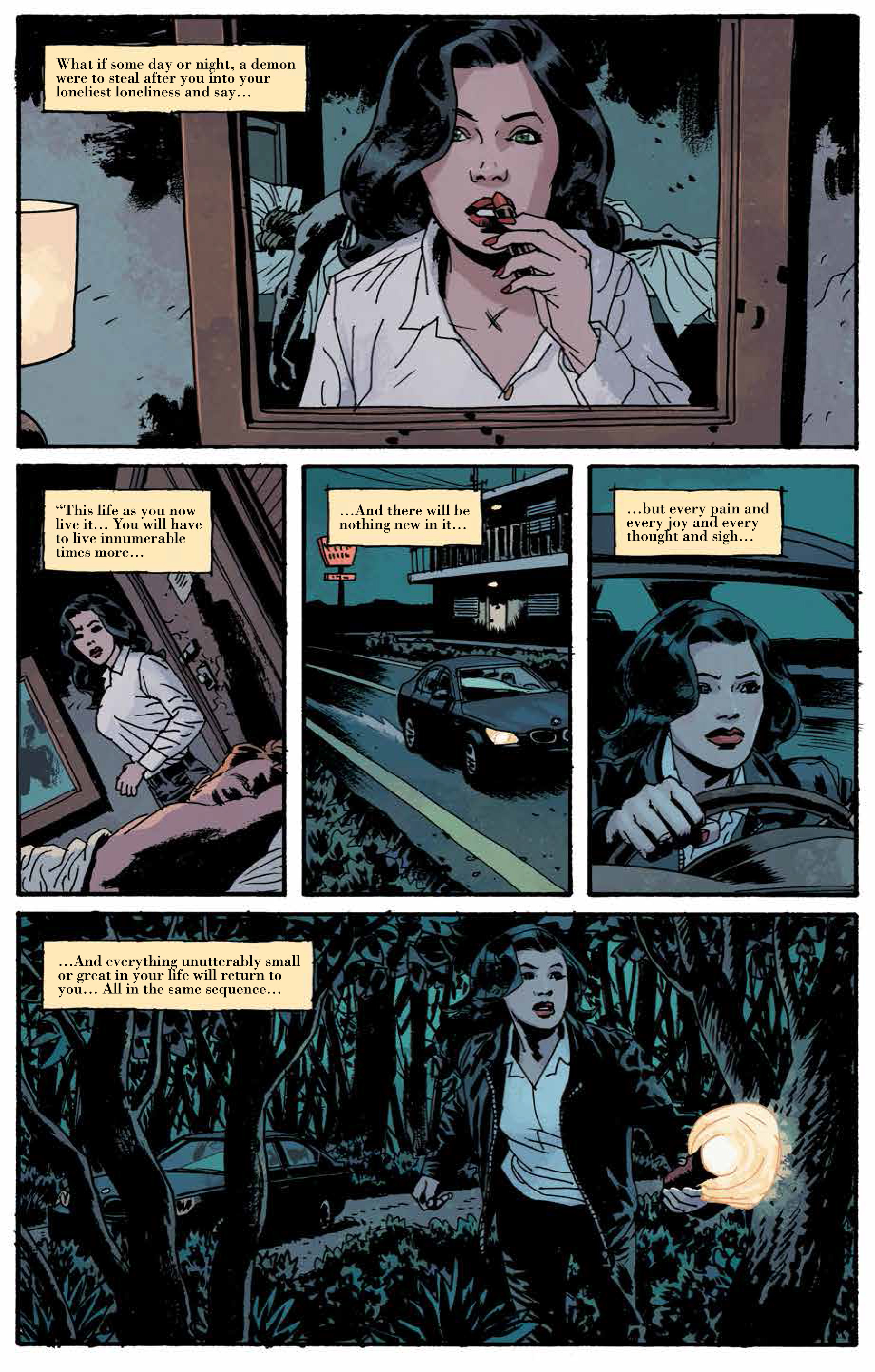 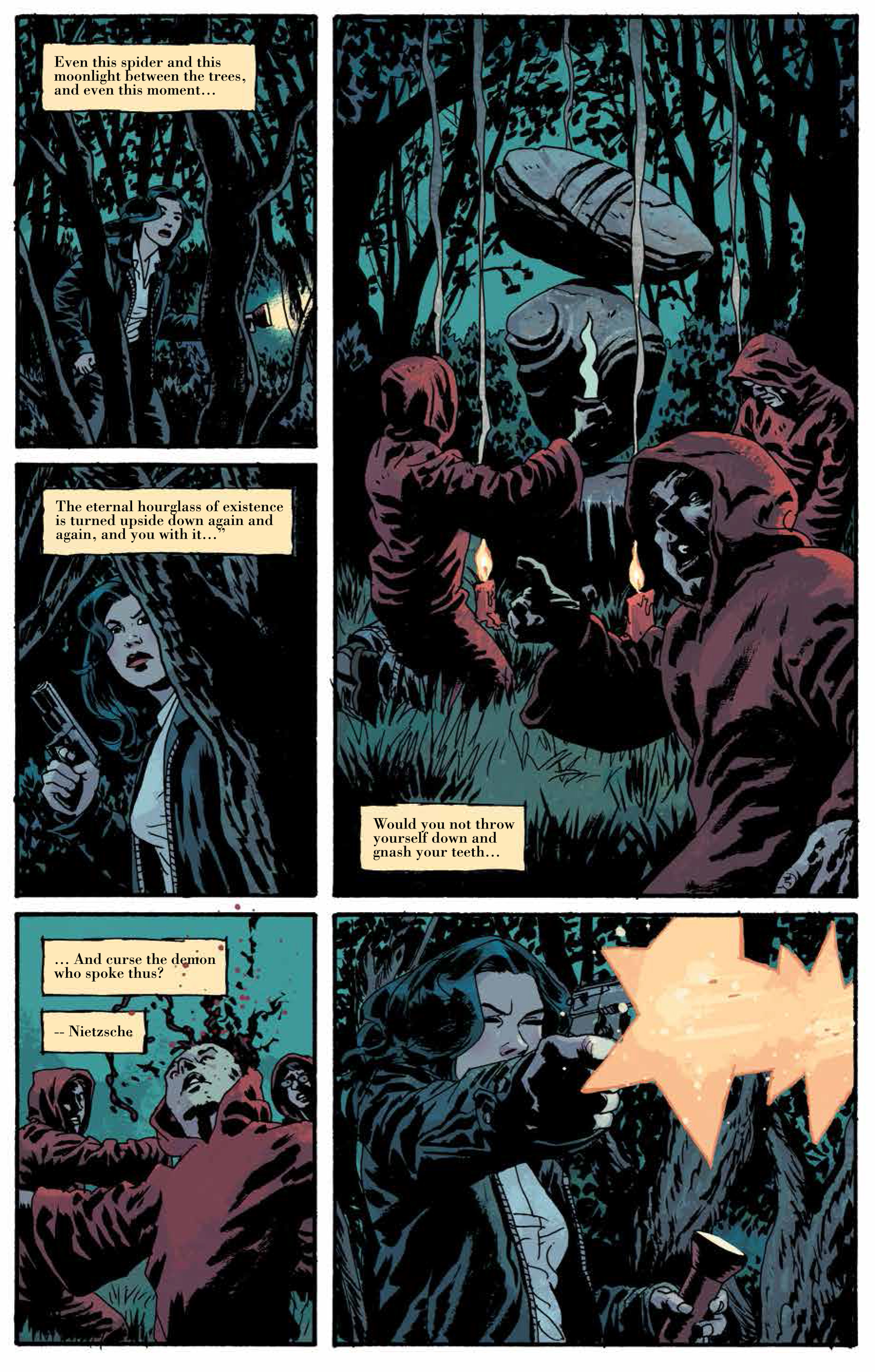 Post Script: I’ve met Brubaker a few times, mostly at comic cons, but we used to go tot he same comics shop. He’s a super cool dude and all fo the books he and Sean Phillips make together are some of my all time favorite reads.