It All Starts With Her 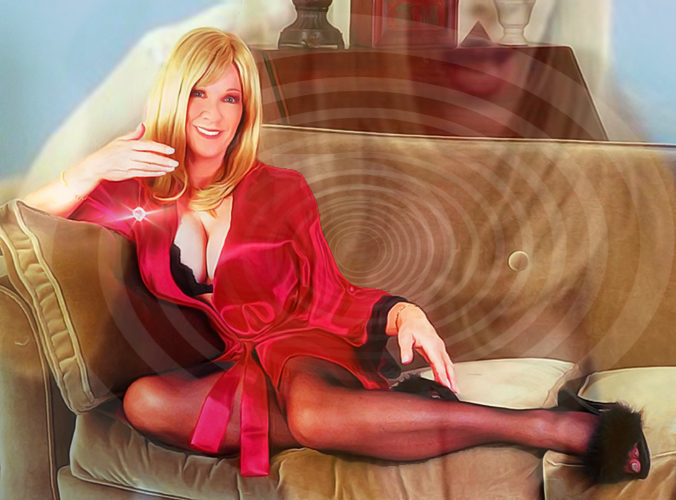 Images gleefully downloaded from her sites and layered together for your enjoyment, not my gain.

WARNING: Since I’m writing about one person’s considerable contribution to our scene, there’s a danger it’s going to read as shameless-in-the-bag adoration akin to those goddess worship devotionals we all know so well.
That’s not what this is at all, I promise.
There’s low points to her work, stuff that didn’t work, and stuff that was both corny and not worth the money (which is the story with everyone who has ever made anything), BUT this is a documentation of history and not devotion.
This isn’t a 2000 word add, it’s history.

(Also, duh, I mean I’m at least a little in the bag for her, and I’ve never hid that)

In 1998 I was listening to the radio (107.7 The End, Seattle) and playing Cybernator on Super Nintendo when the DJ (whose name seems like the one detail of this story I don’t remember) started talking about this strange thing someone saw/he saw on the internet:

A hypnosis recording about turning you into a baby, that you could buy on tape!

They didn’t say who made this recording, but a year later when I first started Yahoo searching:

I only saw one person selling Infantilizing tapes, and that was Goddess Marquesa (who would soon be debuting her second persona Krystal Mesmer, but more on that later), who offered an array of similar content in the Mamma Mia’s Nursery section of her site, a site that wasn’t JUST bondage hypnosis. So, simple deductive reasoning led me to believe that they were talking about her.

(I have no recollection of if Inamortia, Evlina, the original Venus who had people get tattoos that were just 100% the Watchers tat from the Highlander TV series, or like the 2 other Hypno-Dommes in business… I mention Sophoria later, calm down… were doing that kind of stuff, but I think the answer is no, no they weren’t)

Lets take a brief look at the history of hypnosis recordings in general:

At some point in the history of audio recording, some hypnotist thought “what if I record a hypnosis session and sell it’, and then that became a part of the self-help oeuvre.

Then, someone realized you could sell things on-line, and lo and behold you could start buying hypnosis self-help content on-line.

Hypnosis is a participatory and cooperative endeavor, and the absence of real time interaction with the hypnotist has limited and focused what approach’s to hypnosis can be utilized with recordings.

Further, that standard issue hypnosis file is also modeled after the classical clinical hypnosis session and structure, which is:
Pre-talk > Induction > Deepener > Body Suggestion (what the file is ultimately about)
Marquesa took this, and made it sexy.
She did this by focusing on a continuity between the parts, making the entire session a sensual experience from delivery to langiage choices in the induction and deepener, not just the suggestions themselves or the end results.
Most of her sessions told a focused and forward moving story, even if these sessions weren’t narratively themed ones.
Your journey into submission was the story she told you.
This approach created/creates a sense of motion in the subject as they listen. You start somewhere, you end up somewhere else, and this makes hypnosis and the suggestions therein more effective, as it creates a psychological continuity for the subject’s mind to follow.

Not only that, but nearly 20 years later, her early sessions are still just as viable and just as affecting today as they were then. This isn’t to say it’s because we all lack innovation, it’s more akin to the fact a car has 4 wheels and an engine, or that The Rolling Stones figured out rock and roll right out of the gate.

Look, there’s something obvious, and inherently hot about your hypnotist triggering you with a word like Slave, or Obey.

But, there’s a more conceptually important cliché she used, one that has become the marketing angle for countless sessions by other people:

Before the term Hands Free Orgasm became a marketing term, a buzzword, and HFO an acronym, Marquesa’s files presented the idea and the suggestion to experience such just such things.
While I’m not saying she created the idea (that suggestion is probably about as old as hypnosis itself, to say nothing of R-Rated stage shows, or Hypnotist guests on Stern, etc.), it was present and essentially foundational in her work from right around Day 1 of her files.

She is also the first person I recall seeing create POV hypnosis videos (in addition to earlier content where you could watch her subjects respond to trance triggers etc.), which means she may very well have created the very first titnosis video as well (which is clearly a hugely important part of my fetish life).

When she rolled out her second site and secondary persona Krystal Mesmer, her focus pivoted to video (16 years before that was a term), which as stated at the top of the article, presaged the proliferation of Cam Performer ‘hypnosis’ content.
I’m sure she would be the first person to tell you that plenty of her video content was designed with much more focus on titillation over technique, much as her Lady Mesmer site was more focused on eroticism over domination.
This allowed her to diversify what she was selling without really tampering with her Marquesa persona (I didn’t realize Marquesa/Krystal was the same person at first… sometimes I’m slow, and again, early internet), though as time went on Marquesa did take something like a back seat as far as content by volume.

Her history with video is, to say the least, just as interesting and exploratory as it was titillating and enthralling.
Some of the earliest, if not the earliest video content was centered around her triggering and employing suggestions on her female subjects, as well as a few videos of her, and a few of them providing hypnosis inductions.

(Her brief partnership with an old version of Inraptured, and the launch of her Krystal Mesmer site, where you could get monthly memberships, was my first experience as a Mac user struggling with plug-ins, and the fear that came from a shared computer and adding new things to it)

These early videos were, for technical/practical reasons, shorter than her mp3s (some of which started as audio tapes, and that bares repeating for a sense of scope), and offered a different side of the hypnosis experience.
Then, with the Krystal Mesmer site, she started to offer videos that approached her audios in some ways.

There was a technical understanding and foresight that went into these productions that, only on closer examination from a production end, can be truly appreciated:
She recorded blocks of video only content (for use. and then strategic re-use), employed models/performers to provide nudity/raw visual titillation and sexuality, and recorded all of her audio as a separate track, and not as real time performance.
While it could be seen as leaving something wanting, if what you wanted was a real time video of someone talking directly to you, it was an effective and efficient means of production for her that best utilized the technology of the time.

As a quick aside, there are a few people out there who are excellent at improv and power talking their way through ideas when they film/record, a task that is unique, a skill that is specialized, and something that is very hard to do when you are more versed in collaborating with your subject.
Hypnosis is a conversation, not a monologue, but recording anything is just exactly that: a monologue.
The reason I have a business is because a 25 minute mp3 contains a lot of words, and a ten minute video contains a lot of time to fill up. Hypnosis is a team sport, and when you’re playing solo, talking into a lens of a mic, just talking, it takes a very particular type of person (or someone who wants to do a ton of editing) to really put together a solid product.
To bring this back to Marquesa/Krystal, no matter what you thought of her work, one thing was always clear about her efforts (and her team’s efforts), they were making a quality product first and foremost, and part of doing that in this business is playing to your strengths.

In any business, and remember as I am always so keen to point out that this is a business, some people are first, some people are best, and some are lucky.
Some innovations are obvious, and some changes come from simply borrowing ideas from other places.
Ultimately though, when you’re the one person that can combine all of these things (or enough of them), when you’re the person that sees the way the pieces can (or should) fit together, you end up being important.
You end up important because you end up defining the work that will follow after you.
Yes, in out scene there are tons of instances of people coming up with the same ideas at the same time.
There are tons of instances of peoples’ minds naturally gravitating to the same conclusions and in turn creating the same kind of work.
This is important to note.
It’s important because so much of the work in our fetish is done in isolation, inspired by the same greater and broader sources, created on islands of limited feedback and limited exposure to others.
So, when I say Marquesa did ‘this’ first, or did ‘that’ first, it doesn’t mean everyone else is copying her.
Though there is plenty of communicated and inherited wisdom and insight into the work, as well as a lot of inspiration and/or copying, copying does happen, and usually the people doing it are much closer to pure inspiration than raw plagiarism, but that’s always the end result of a good idea.
Further, if you have the same idea as a person that gets it out into the market before you, you aren’t really copying, you’re just not first, and that’s both a fine and important distinction.

So, with all that said, like a good hypnotist let me repeat myself again:

Some people are first, some people are best, and some are lucky.
Some innovations are obvious, and some changes come from simply borrowing ideas from other places.
Ultimately though, when you’re the one person that can combine all of these things, when you’re the person that sees the way the pieces can (or should) fit together, you end up being important, because you end up defining the work that will follow after you.

If you’d like these kinds of long form thought on another hypnotist, feel free to suggest one here.

If this was food for thought and you think it may have helped you at all, why not contribute a dollar to my coffee and comics fund… the things that keep me sane as I work.